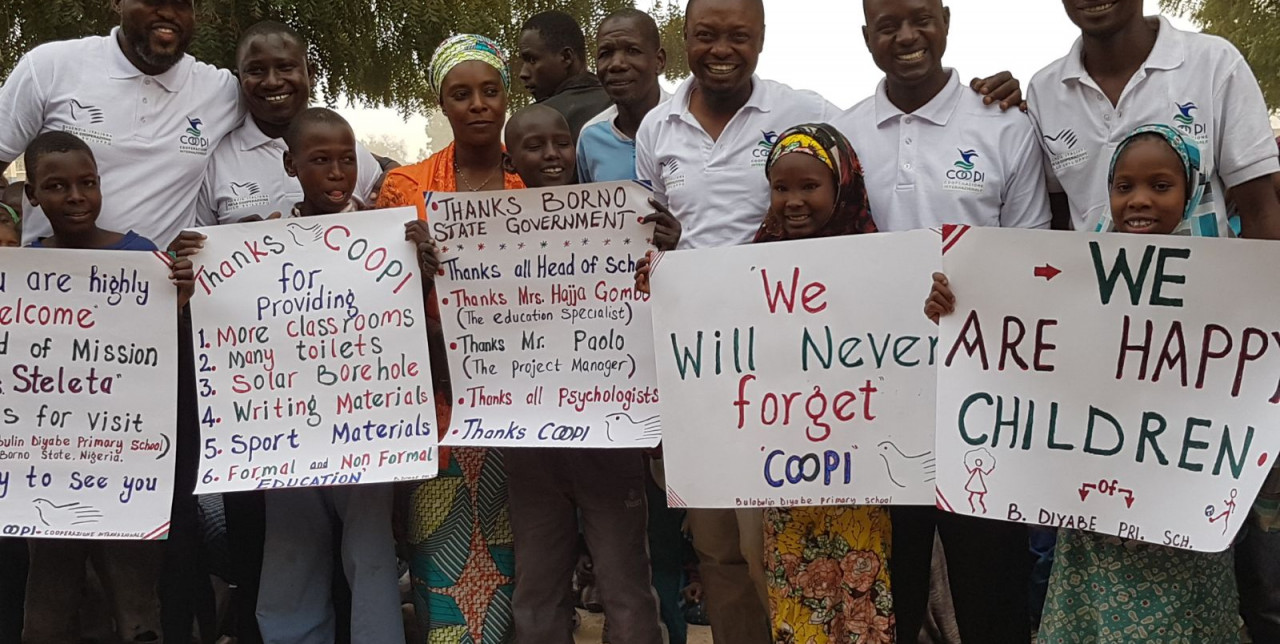 The COOPI "program to extend access to quality education (both formal and informal) and psychosocial support to school-age children" in refugee camps and evacuee communities in the urban area of Maiduguri (Nigeria), funded by AICS (the Italian Agency for Development Cooperation)  has achieved excellent results, as reported in intermediate programme assessments. Many of the parameters initially set for the project, which began in June 2017 and will end in April 2018, have been exceeded, proving how the efforts made have brought about real change.

As regards the project’s first concern, that of education, the aim was to improve access to safe classrooms for vulnerable under-age children and provide them with both formal and informal, high-quality, inclusive education. According to the data collected in September, 5,245 children aged between 6 and 17 were enrolled in the 2017/2018 academic year in schools in Gonidamgari, Umarari, Ngarannam and Diyabe. In each school, a Team Leader was appointed with the specific task of updating the attendance registers of teachers and children, drafting weekly schedules and providing the education supervisor with regular reports. The results achieved exceeded all expectations: by the end of February, not only had the aim of organising 18 classes provided with all the materials necessary been achieved, but 2,317 under-age children who were either out of school or who had left school early had been enrolled and/or re-enrolled in formal education, compared to the initial minimum target of 700. Another 2,157 under-age children in similar circumstances were enrolled in informal education and a literacy programme, 300 more than forecast. A total of 258 teachers have received psycho-educational training, compared to the 175 who had originally been earmarked.

A similar result was achieved as regards the protection and inclusion of under-age children.
The creation of scholastic committees in each school allowed COOPI to continue its projects, planning the identification of under-age children who qualified for inclusion in its educational programmes, as well as the administration of classes and toilet facilities.
Over 6,600 under-age children participated in extra-curricular activities, compared to the 3,500 envisaged. These included creative workshops, sports and musical activities that were grouped according to age and class (involving children who ranged from 6 to 17 years of age). Play and recreational activities were added, such as sports competitions that were made possible by the availability of the football pitches and volleyball courts provided by the project, occasions that tend to bring the entire community together.
Double the number of vulnerable children and adolescents originally estimated – 710 – received psychosocial support. Social workers and children’s entertainers selected over the past few months identified children who needed support and, in partnership with COOPI’s psychologist, provided counselling services that addressed both teachers and individual children and their families.
Activities designed to raise awareness of the issue of protection were run in schools for safety reasons, whilst an approach based on information, education and communication was used in districts. This permitted the discreet identification of cases of abuse and exploitation. Last but not least, the presence of teachers during these visits, as well as the members of the scholastic committees, made it possible to carry out awareness programmes regarding nutrition and hygiene standards, particularly as far as recommendations regarding children and babies’ nutrition were concerned.