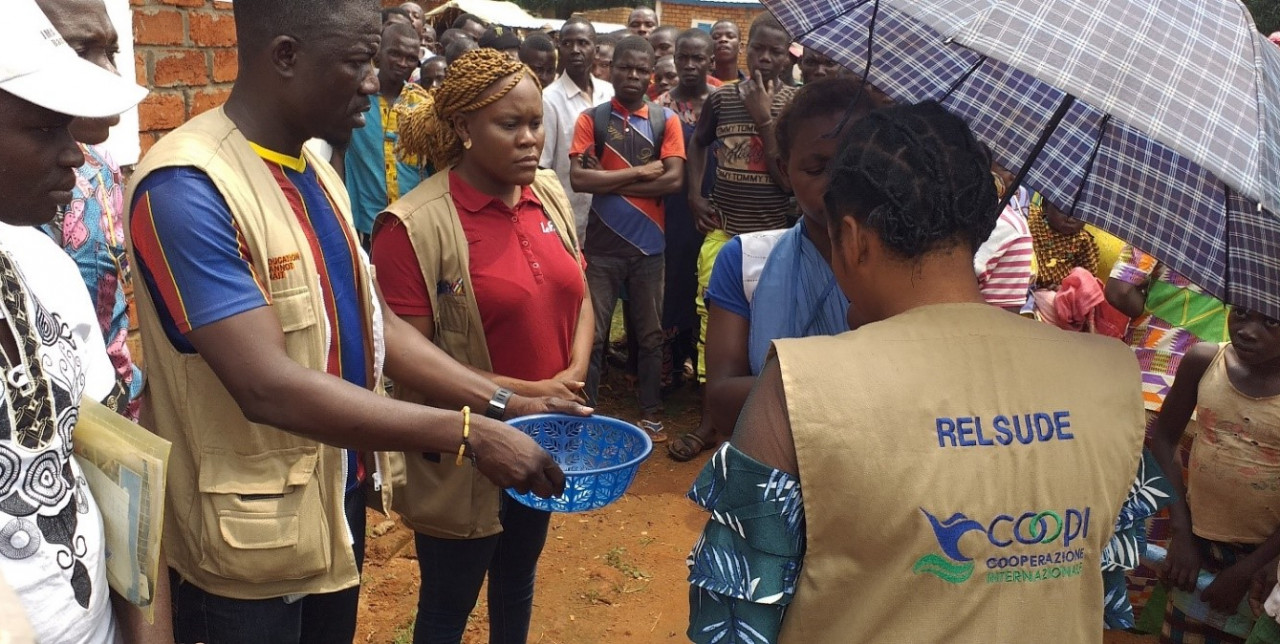 CAR. Beside Bakala's population to rebuild their future

Central African Republic - From 16 to 22 July, in the framework of the project "I LA TENE TI TO NA MBONGO - All together for the South-East (RELSUDE) - financed by the European Union's Bêkou Fund and implemented in Consortium with ACTED (Leading agency), Concern Worldwilde, OXFAM, IMPACT Initiative and Free Press Unlimited - COOPI brought a mission to the sub-prefecture of Bakala located in the Prefecture of Ouaka. This is one of the sub-prefectures where there is very limited access to services and infrastructure, with serious repercussions on the living conditions of the local population, especially on the most vulnerable categories, notably women and young people.

In order to give a new impetus to the local economy and ensure income growth, during its mission to Bakala the RELSUDE project team launched activities related to the first component of the project, namely economic recovery, which is based on the Labour Intensive Public Work (LIPW) approach.  Within this framework, it is expected that 170 Bakala beneficiaries will actively participate in the rehabilitation of identified economic and social infrastructure and save the money received to reinvest it in new economic opportunities, by creating a dynamic of investment rather than consumption of the money received. In addition, special attention was paid, already in the identification phase of the beneficiaries, to the inclusion of women in order to ensure full social cohesion. Thus, 31% of the 170 beneficiaries are women.

In order to launch the activities and select the LIPW beneficiaries, the COOPI team first set up the project monitoring committee, composed of ten members of the local community, nine of whom are men and one a woman. These are the authorities and community leaders whose inclusion and collaboration in the different phases of the project are key elements that guarantee the sustainability of the action brought by COOPI. Subsequently, the LIPW beneficiary selection committee was formed, which, together with the project monitoring committee and the support of the COOPI team, chose the strategies to be used for the sensitisation and recruitment of beneficiaries in accordance with the LIPW CAR guide.

In order to sensitise the largest part of the population on the activity, we proceeded with town criers, posters in the town and announcements in churches. The recruitment - which took place through a public draw in front of the Bakala town hall - was an important moment of involvement of the whole local community, which really felt that it was an active part and protagonist of the activity. A total of 170 LIPW beneficiaries were recruited, 119 men and 51 women, and soon they will start working on the rehabilitation and/or construction of socio-economic infrastructures validated by COOPI on the proposal of the local authorities and the project monitoring committee.

The RELSUDE project is being implemented in a country which, according to the humanitarian needs outlined in the HNO (Humanitarian Needs Overview) 2020 analysis, is marked by deep structural problems, a very volatile security situation and the persistence of violent shocks. In addition, the security context deteriorated further at the end of 2020, in the run-up to the presidential elections of 27 December 2020, when an upsurge in violence was observed throughout the country. Therefore, the actions implemented by COOPI and the Consortium thanks to funding from the Bêkou Fund represent an important step towards creating concrete opportunities for Central Africans to improve their living conditions and get back on the road to peace and stability.

Since its creation in 2014, the Bêkou Fund has invested nearly 300 million euros/196.7 billion CFA francs in CAR for the benefit of 2.9 million Central Africans. Its contributors (the European Union, Germany, France, Italy, the Netherlands and Switzerland) are making a long-term commitment to improving the Central African population's access to basic services (health, water and sanitation) and essential infrastructure. By accompanying the most vulnerable and supporting economic recovery - particularly in the agricultural sector - as well as national reconciliation and gender equality, the programmes financed by the Bêkou Fund lay the foundations for sustainable and inclusive development.