almost 60 years AGO, we still believe in our strategy.

COOPI was founded by Father Barbieri on 15 April 1965. This is when it all started - a journey spanning more than fifty years during which COOPI and Italian international cooperation have expanded and evolved in very different aspects. Yet COOPI story began before 1965. In fact, it dates back to 1961, when Vincenzo Barbieri, a young Jesuit priest, was sent to Lyon, in France, to study at the Faculty of Theology, in order to go on a missionary mission to Chad. Barbieri found the cultural environment in France to be much more lively and open-minded than the one he experienced in Italy in the years before the Second Vatican Council. In Lyon, he came into contact with international secular movements engaged in voluntary work in developing countries for many years. In 1962, Barbieri turned down the opportunity to leave as a missionary himself and returned to Milan, to train volunteers who were eager to leave for developing countries. Father Barbieri has been the one to include secularity in missionary activities. COOPI contributed to the drawing up of the Pedini Law which instituted the Community Service in the developing countries. The first project funded by the Italian government was set-up. The use of public funds transformed COOPI from a voluntary to a professional association. COOPI was one of the first European NGOs to sign a deal of partnership with the European Commission's Department of Humanitarian Aid. In Congo, COOPI prepared itself to receive the population fleeing genocide and 15 thousand children separated from their parents during the exodus. COOPI experimented the “community therapeutic cure” to save children from malnutrition. This emergency approach would later be adopted as governmental protocol. COOPI and Father Barbieri received a special mention in the Peace Prize in the Lombardy Region and the Certificate of Civic Merit of the Municipality of Milan. COOPI inaugurated the inter-cultural approach that would be adopted by the State in order to promote indigenous health and justice. COOPI contributed to the process of ratifying the ILO 169 convention on the rights of indigenous populations. To reduce the risk of disaster, the Country was mapped using mobile and satellite technology while actively involving the local communities. The government awarded the NGO's access to renewable energies project for the extremely high benefits it provided to the community. COOPI celebrated 50 years. In occasion of this important anniversary, COOPI presented its 2015-2020 Strategy and it published its first report focused on Social Accountability. In order to provide psychological support to persons seeking asylum and refugees evacuated from Libya, COOPI starts to collaborate with UNHCR in Niger on the ETM programme (Emergency Transit Mechanism). The effort put into education interventions keeps growing, especially for education in emergency, carried out in Middle East and Lake Chad countries. In 2019 COOPI approves the adoption of a decentralised organisational model. In 2020, the COVID-19 pandemic led COOPI to reshape its intervention, carry out awareness-raising activities and conduct a survey on the impact of the pandemic on the food security of beneficiary communities in 9 countries. In 2021, COOPI outlined its new Strategy "The Near Future", which indicates the lines of development and strategic objectives on which it must focus in the coming years. In order to provide effective answers, COOPI must grow to support more and more people.

Today COOPI is one of the largest and most important Italian Non-Governmental Organizations. It works in 33 countries in the world and cooperates to implement more than 250 development and emergency projects a year with civil society, public administrations, international and academic authorities, public and private donors.

Known as a “megaphone of charity” for his style in moving the consciousness of the Italian population undergoing great change, Father Barbieri founded COOPI on the 15th of April 1965. Father Barbieri was an unusual Jesuit and a tireless worker and moreover he was a missionary until the last days of his life: he was not satisfied being at the head of his NGO, but he did all he could within the activities of raising awareness and funds for the poor.

From the roads of Milan to the African districts, Father Barbieri’s priority remained that of helping others in need, making no differentiations, no judgements. This was a new way to consider the International Cooperation, finally open to motivated members of the lay public, where cooperation means “to do things together”, side by side. 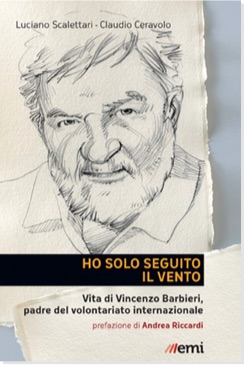 "I just followed the wind"

“I just followed the wind” (Italian Missionary Editor, pp 240, euro 14,00, preface by Andrea Riccardi) is the book that describes the story of COOPI and its charismatic founder, Father Vincenzo Barbieri (1930 – 2010), for the first time.The book was written by two protagonists and friends of Father Barbieri: Luciano Scalettari, a journalist of the Famiglia Cristiana, who was a correspondent in Africa for two years and Doctor Claudio Ceravolo, now President of the NGO. The book was inspired by one of the most famous phrases of Father Barbieri: « I met this reality of lay people leaving, and I, too, departed to where the wind was blowing».