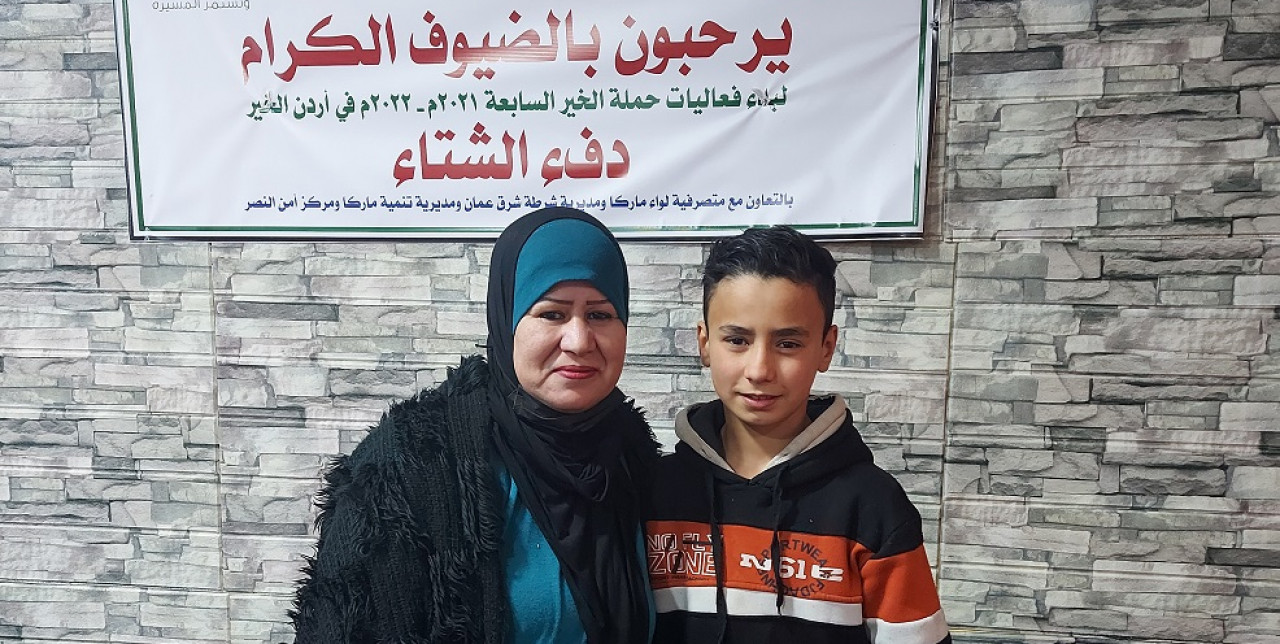 Ahmad is 14 years old and fled the war in Syria. He now lives with his family in Jordan, in the East Amman neighbourhood, where a large number of refugees are concentrated, there is a high rate of economic vulnerability and fewer services, especially for children. Here Ahmad and his mother Fatimah came into contact with the COOPI team through a local community association, Al Manara, which operates in the capital's neighbourhood.

Volunteers from the association contacted me explaining that COOPI offered support services for teenagers. I then came to the association where I met Rasmiyeh, to whom I explained the difficulties we were facing with my son Ahmad.

Since August, Fatimah and Ahmad have been supported by Rasmiyeh, COOPI's case manager. Together they have developed an action plan to support Ahmad's reintegration into school. Fatima continues:

For two years Ahmad dropped out of school. He couldn't take classes online - we don't have a laptop or tablet or a stable internet connection; he was also working in a household store to financially support our family. My husband is elderly and doesn't work, I work occasionally as a domestic worker and we can't earn enough to meet our needs.

Child labour has exposed Ahmad to incidents of verbal violence and abuse, that have taken a toll on his health and behaviour. Fatima points out:

Before participating in the project, Ahmad was very shy, spending almost all his free time at home and isolated, now he participates in after school activities organized within Al Manara and youth club activities.

In addition to Rasmiyeh, Ahmad and Fatimah are also being followed by a COOPI psychologist, who has developed a family therapy plan for both of them to create a family system of support and protection for Ahmad. Fatima tells:

During meetings with the COOPI team, we discussed Ahmad's risks, psychological pressures, and his desire to resume his studies; thanks to financial assistance, Ahmad now regularly attends school and is enrolled in the ninth grade.

During one of our meetings Rasmiyeh suggested that I attend youth club meetings with 14 other teenagers. At first I didn't feel very comfortable, especially speaking in front of everyone, but then we started to discuss the problems faced by kids our age and how we can address and solve them. Together with 5 other boys in the group, we are working on a community proposal to create a recreational space in a public park here in Al Manara.

Since September, Ahmad also participates in remedial classes offered by the local partner of the project, the Institute for Family Health:

(...) the afternoon classes within the association helped me in the first months to catch up with the lessons I missed and I managed to improve in Arabic, English and mathematics. Three times a week I and thirty other kids come to Al Manara to do their homework helped by volunteers. My grades have improved and thanks to my school's remedial program I was able to pass the exam to advance from the seventh to the ninth grade, so I was able to make up a year of school that I had missed when I was working.I want to complete my studies until the Tawjii (high school diploma) exam and I hope to be able to support my family to overcome the difficulties related to our status as asylum seekers.

Like Ahmad, many other adolescents are supported by COOPI through the project: “Sawian - Strengthening social protection services for vulnerable adolescents and their families in the host and refugee communities of Amman, Irbid and Russeifeh”, implemented in partnership with ICU - Istituto di Cooperazione Universitaria and funded by AICS (Italian Agency for Cooperation and Development). The project supports the school reintegration of 100 adolescents between 12 and 17 years old through economic support; in addition, 75 families in highly vulnerable situations receive further economic assistance.  Thanks to the work of three "case managers" and a psychologist, COOPI intervenes in support of families, identifying exit strategies from negative survival mechanisms, such as child labor, school abandonment and early marriages.