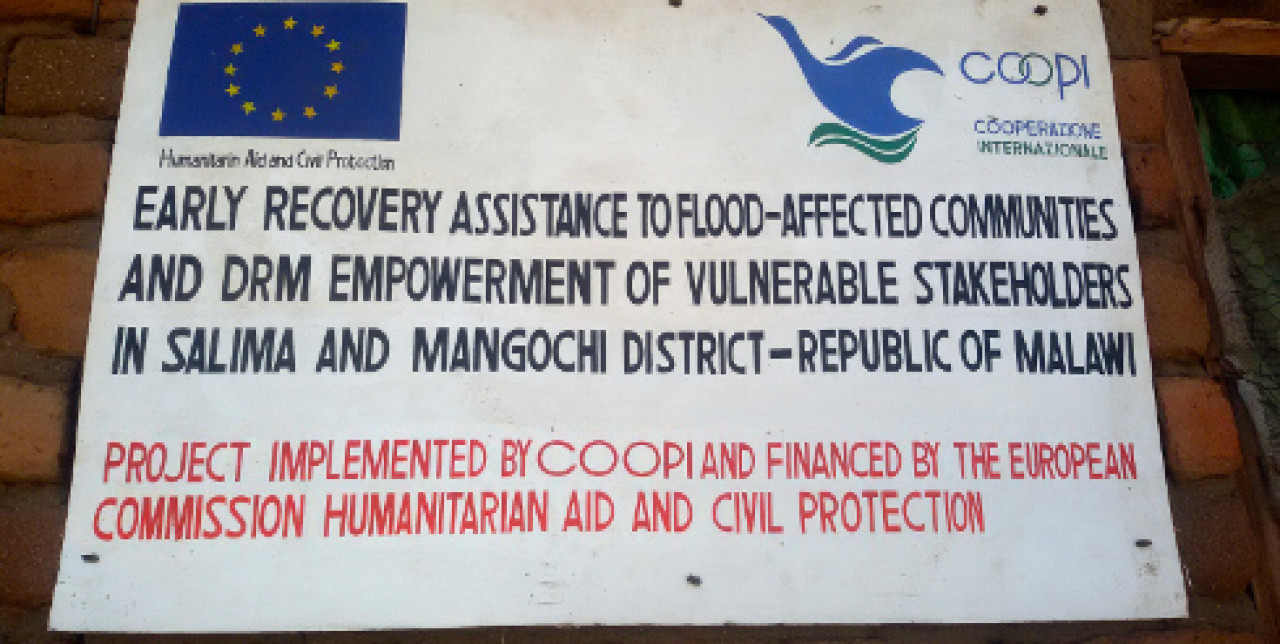 In the first months of 2015, Malawi has been affected by the worst floods in at least a decade. People had to leave their fields and belongings, in order to flee to a safer place. Crops, houses and livestock have been washed away or severely damaged, leaving the population with no food or resources. Moreover, a subsequent long period of dryness has further worsened the condition of the farmers, in a country where over 80% of the population depends on agriculture.

Thanks to the support by the European Commission's Humanitarian aid and Civil Protection department (ECHO), COOPI has provided 3,000 households with seeds and irrigation pumps to allow them to plant again. Damaged weirs, wells and canals have been fixed. Moreover, local stakeholders and communities have been trained in order to be prepared to face another potential hazard-related disaster.

COOPI's intervention, entitled "Early recovery assistance to flood-affected communities and disaster risk management empowerment of vulnerable stakeholders in Salima and in Mangochi Districts", started on July 2015 and ended on November 2015.

Here are the witnesses of two beneficiaries.

Justin is a young farmer living in Nankhwali, Mangochi. He lives with his wife, three children and his old mother. The area was harshly hit during the floods, because of the over-flooding of Lisangadzi river. Justin and his family lost their crops, and had no resources to buy new seeds for planting again.

"We didn't know what to do, we lost everything. I had no idea about how I would have fed my children for the following months. Thanks to the seeds provided by COOPI and ECHO, I will harvest enough from my plot, I will be able to take care of my family". He showed proudly his field.

"I also took part in the reconstruction of damaged wells through Cash for Work. With the money earned, I have bought school material for my children, oil and sugar, and pesticides to protect my crops".

Matope is located in Mangochi, around 30 km far from the main road and the lake. The floods have not only damaged the crops, but also the weir that was paramount to store water to be used for irrigation during the dry season. The provision of pumps and the rehabilitation of the weir have allowed local communities to plant even after the end of the rains.

"I am happy that the weir has been fixed. Otherwise, we wouldn't have had any possibility to cultivate without rain". Mary is 48, head of a numerous family, which includes three orphans of 6, 8 and 12 years old. As such, she is particularly vulnerable, with few possibilities of recover after a shock like the destruction that hit her village.

"Many women have been involved, even in the reconstruction of the weir. This is good, since women are more reliable, hard workers, and responsible. Everyone should understand this". COOPI is committed to empower women and girls.

The great majority of Malawi population is composed by children. Chronic malnutrition is a terrible plague that affects the Country, which intensifies during crisis, since families are less able to provide food and care for children. The damage brought by 2015 floods risks to further reduce the amount of food available until the next harvest, in March 2016.

Emergency interventions are paramount to reduce the risk and exposure to food insecurity. The ECHO funded project allowed local communities to secure a second harvest after the end of the dry season, thus to have enough food to feed several families until the next harvest. Moreover, COOPI is contributing in implementing long-term interventions in order to address the root causes of vulnerability and to eradicate hunger.

COOPI has provided Disaster Risk Management trainings to local committees, in order to improve preparedness and communities' capability to face and react to shocks. Mapping the territory is paramount to have a clear understanding of the areas exposed to hazards, the ones in a safer position, the kind of risk present on the ground, and the room for developing contingency plans.

COOPI experts have guided and supported the communities in creating their own hazard maps, merging indigenous knowledge with technical competences. "I am proud of what I have learned. I am happy to have acquired the capacity to help my village by myself" said Julia, member of Lizimba Civil Protection Committee.